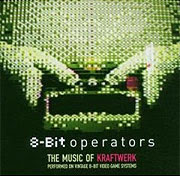 Oh dear, tribute albums. Always a hit-and-miss affair, so anytime you get a decent hit:miss ratio, count yourself lucky.

Nevertheless, I’m kind of sucker for tribute albums that focus on artists I really like, so I grabbed a copy of 8-Bit Operators while I was in Portland, which had already made some ripples in the electronica and music-nerd communities.

The idea behind this one is quite brilliant: Kraftwerk originals reinterpreted on 8-bit video game systems and other “lo-bit” computer equiipment. Ironically, the technology we’re talking about here, while quite out of date by today’s standards, is still very likely more “bitpower” than Kraftwerk themselves had available to them back in the day!

The homage-ers on this tribute disc come from all over, but particularly (as one might expect) Deutschland; three of the songs are performed in their native German. Most are very straight interpretations, adapted or modified only to accommodate the equipment. Naturally, given the close harmony between the original realisations and the vintage of these synthesisers, these tracks tend to be the most enjoyable.

On a few tracks, longtime videogamers should be able to actually identify what systems were used; this sample track, “Computer Love” by Covox, is clearly realised with the help of 90s Nintendo systems (and turns out to be very well matched to that company’s videogame soundtracks!).


The biggest failing of this compilation, though, is the human element (unsurprisingly, I suppose): most of the artists participating are programmers, not singers, and for the most part that becomes very obvious very quickly. Most can do a passable but forgettable job of carrying the tune, but none of them (from a vocal perspective) give any of songs new life. The one attempt to do so, a live (!) performance of “Die Mensch-Maschine” featuring a “drummer/rapper” named Counter Reset, is simply unlistenable.

Getting a professional synthpop musician as Musical Director (let’s nominate Mark Mothersbaugh for the job) would have resulted in vastly better vocals and the daring needed to re-interpret the songs and get away with it. Lacking that, Kraftwerk’s own reinterpretation of their stuff on 1991’s The Mix still stands as the best Kraftwerk re-invention.

Nullsleep’s “The Model” adds some bottom and more-robotic stylings in place of the original's detached artiness, “Spacelab” wisely digitises its few vocal moments so completely that it could almost pass as genuine Kraftwerkproduckt. And you have to also salute the range of songs chosen; no less than three of the 15 tracks herald from Ralf & Florian’s pre-1975 “proto” Kraftwerk albums, including “Kristallo,” “Tanzmusik,” and “Antenna,” the last of which has been transformed into a jaunty little exercise indeed. If one didn’t know its origins, it could easily be a hit on college radio today.

I would say fully half the album is excellent or good enough to keep, but that leaves another half that’s, well, 2-bit. As mentioned, some of the “losers” are only let down by the fanboy vocals, but a few (particularly the aforementioned final track “Die Mensch-Maschine,” Receptor’s hopelessly over-produced “Trans-Europe Express” and David E. Sugar’s gay-club-rave-up of “Radioactivity”) are just plain misguided.

Overall, I give the effort a “B” grade for a job mostly well-done -- if you’re the type that likes their synthrock to fart out the notes, you’re gonna love this -- and can recommend purchase of the album (or selective download of whichever you deem “the good tracks”).

The fact that I bought this on a “real” CD and can remember when “retro-digital” was just “digital” is making me feel old. Damn you iKids of today!

I'm using it to denote CDs I bought during your birthday celebration. Not all CDs will have that designation, just the ones I bought in Portland.

Actually, I'm amending that: the "RK50" designation will only be assigned to CDs that were a) bought in Portland and b) bought directly due to your influence. So the "RK50" tag will be coming off this review.

Can't thank you enough for re-introducing me to The Monochrome Set!

This is Radio Chas!

Everybody hold on tight!